SEND US YOUR AUDIOGRAM

The vestibular system is the only special sensory system in which the unilateral loss of function can threaten the long term survival or wellbeing of the organism. Injury to peripheral or central system can result in considerable disability.

Most disease process areself-limiting and a spontaneous functional recovery can be expected.

This is due to the remarkable ability of CNS to recover from labyrinthine injury, a process known as vestibular compensation.

Failure to compensate could be from continued dysfunction of the labyrinth as in Meniere’s disease or failure of CNS to compensate.

Peripheral vestibular system translates the linear and angular acceleration of head into afferent neural impulses that provide the brain with information necessary to maintain gaze stability and postural control during active movements of the head.

The information from each vestibular system should be concordant with the other side. When the information is discordant the person will feel vertigo, nystagmus and vegetative symptoms like nausea and vomiting.

(meniere’s disease produce temporary electrochemical or biomechanical disturbances in the labyrinthine function resulting in vertigo spell of vertigo, that resolve once the disturbance has been rectified. In these cases the resolution of symptoms happen because of return of the labyrinthine function to baseline and not because of adjustment in the CNS. Other causes include labyrinthitis, Otologic surgical complications or temporal bone fractures.

The goal is to achieve stability of gaze and postural control both under static and dynamic conditions by whatever means are available.

Like; Restitution of peripheral vestibular function after successful treatment of vestibular neuritis, if this does not happen then the patient will depend upon vestibular compensation

This process is defined as changes which occur in the CNS following a vestibular lesion by which an optimal functional state is re-established.

Adaptation of input-output responses in both the vestibule-ocular and vestibule-spinal pathways,

e.g: VOR as an example: After acute unilateral loss of vestibular function: there is a nystagmus because of imbalance of inputs coming from both labyrinths.

After a period of adaptation spontaneous nystagmus disappears.

A person’s ability to spontaneously compensate for dynamic conditions is quite variable. Adaptation may be excellent but even in those individual it is not unusual to find those who have recovered from destabilizing vestibular injury with no vestiges of instability or disorientation under challenging conditions.

Reduction in pathologic response to a specific movement brought about repeated exposure to provocative stimuli.

In case of complete loss adaptation of VOR is not possible and so sensorimotor substitution is required.

Those with bilateral loss become highly dependent upon visual and proprioceptive inputs.

Gaze stability is compromised so the patient will have oscillopsia during head moments that are at frequencies and speed greater than operational limits of the smooth pursuit system.

The initial central compensation process is enhanced by head movement but is delayed by inactivity.. So if the person adopts a lifestyle avoiding rapid head movements the process of compensation may never be optimized. This is the reason that some patients keep on having vertigo associated with head movement years after the initial uneventful recovery.

The effectiveness of CNS recovery is also hindered by pre-existing or concurrent central vestibular dysfunction.

Central vestibular compensation seem to be relatively fragile energy dependent processes. Relapses could occur in cases of inactivity, extreme fatigue, change in medication, general anesthesia, or an intercurrent illness. This relapse does not indicate an ongoing or progressive vestibular dysfunction but often a temporary lapse of vestibular compensation.

The unique capacity of the central nervous system for adaptation to changes in the sensory environment is known as adaptive plasticity.

The acute phase of vestibular compensation constitute the initial response to the labyrinthine injury and occurs within the first 24 to 72 hours. This portion of the process results in correction of the static symptoms of unilateral vestibular injury, including intense vertigo and spontaneous nystagmus.

The chronic phase of compensation accounts for correction of the dynamic symptoms of a vestibular injury, such , disequilibrium when walking and vertigo/disorientation during activities that require active head movement. In an otherwise healthy individual, this would be expected to take place over 1-6 week interval.

The compensated vestibular system appear to be somewhat fragile and susceptible to de-compensation by fatigue medication and associated illness.

There are several sensory inputs that seem to play a role in successful compensation for vestibular lesions.

The visual input does expedite but is not essential for the elimination of spontaneous nystagmus.

The resolution of spontaneous nystagmus and the other static symptoms after initial labyrinthectomy is due to a restoration of tonic activity in the ipsilateral vestibular nucleus that is independent of input from the contralateral intact labyrinth or vestibular nucleus.

The administration of benzodiazepines such as diazepam (Valium) acts to potentiate action of GABA. Diazepam administration is shown to decrease tonic activity in vestibular neurons and to decrease the response these neurons to rotational stimuli in the cat.

The acute phase or vestibular compensation results in elimination of static symptoms such as intense persistent vertigo, spontaneous and ataxia due to disruption of postural control. This process takes about three days. And is due primarily to restoration of tonic activity in the ipsilateral vestibular nucleus.

The chronic phase of recovery is not very reliable. And the recovery course is longer.

Treatment depends upon the canal involved: 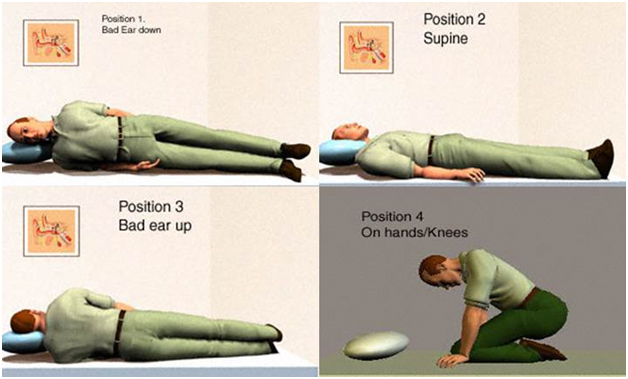